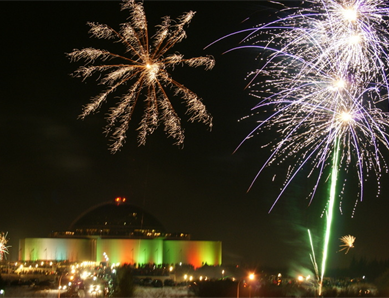 New Year's Eve is one of the greatest holidays in Iceland, almost as big as Christmas. Although there are no offical city sponsored events, private parties and celebrations are held all over the city. New Year´s Eve is one of the most popular times to visit Iceland, Along with New York, Berlin, Rio de Janeiro, Paris, London, Sydney and Hong Kong, Reykjavik is in the top 10 best places in the world to celebrate New Year's Eve!

New Year’s Eve in the capital of Iceland is an exratordinary unforgettable experience created by the people of Reykjavik who together do an amazing job with the pyrotechnics and celebrations. Interesting fact is that there are no offcial fireworks organized by the city, the whole extravaganza is solely due to the creativity and festive spirit of its residents. With only five hours of daylight in late December, locals in the northernmost capital of the world ceratinly know how to party and are ready to party like no one else.

New Year's Eve in Iceland starts at 6.00 pm with the mass at Reykjavík's Cathedral with many people attending. Those who cannot attend the mass itself are listening to it on the radio while having a big family dinner or preparing the dinner. Traditionally after a festive family dinner, Icelanders gather by the local bonfires (brennas) where they sing, dance, play music and burn away all troubles and bad moments from the past year. Meanwhile, fireworks light up from every corner of the city, thanks to fairly relaxed government restrictions.

At 23:35 a brilliant display of fireworks is unleashed as 200,000 people (approx.the population of Reykjavík) set off around 500 tons of fireworks. They can’t wait for midnight and start shooting ‘em up as soon as Áramótaskaup is finished! After midnight, the nightclubs and pubs remain open and the celebrations go on well into the morning. Crowds gather around local landmarks like Perlan and the Hallgrimskirkja Church in order to get the best view of the private firework displays and the city. After that many of them head to bars and clubs to continue the celebration.