Copenhagen - the Most Popular Destination in Scandinavia 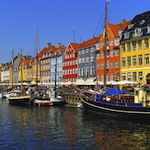 Denmark’s capital city of Copenhagen is by far the most popular tourist destination in this beautiful Scandinavian country. With so many sights to see, numerous activities to join in on, and tons of delicious food to eat, when you travel to Copenhagen, you'll be sure to find something that suits your needs.

Tourists from all over the world arrive by sea, air, or land to experience Copenhagen’s greatest sites including the Tivoli, a famous garden and the second oldest amusement park in the world featuring thrilling roller coasters, beautiful fountains, flower beds, and stunning custom-designed lights throughout the park, as well as the Tivoli Concert Hall, an important venue for classical music. Another popular tourist hot spot is the Little Mermaid statue which sits on a rock near the water at the Langelinie promenade. The statue has been an icon in Copenhagen since 1913 and is based on the fairy tale by Hans Christian Andersen. Copenhagen is also home to many castles, restaurants, museums, and is the place to be to experience exciting night life.

The National Museum is Denmark’s largest museum of cultural history and archaeology and contains history from Danish and other foreign cultures. The National Gallery holds collections from the 12th century to the present day and is home to work from artists such as Picasso, Rembrandt, Matisse, Rubens, and Haaning. Other notable museums include the Ny Carlsberg Glyptotek Museum, Thorvaldsens Museum, the Ordrupgaard Museum, Louisiana Museum, the Danish Design Museum, and Cisternerne Museum. The Copenhagen Concert Hall, the Royal Danish Theatre, Vega in the Vesterbro district, and the Copenhagen Opera House are just a few popular spots in the city to catch exciting musical, symphony, or ballet performances.

The climate in Copenhagen remains rather moderate throughout the summer months, staying in the upper 60s to lower 70s June through August and fluctuating anywhere between the mid 20s and upper 40s throughout the winter months.

While getting around by car is easy in Copenhagen, residents are encouraged to walk or ride their bikes to help keep their city green. Taking advantage of public transportation is also encouraged and easy to do with Copenhagen’s great Metro system bringing riders where they need to go in the city, the S-train network which connects the outlying boroughs, as well as the Main-line railways connecting the surrounding areas out toward the airport and to the famous Øresund Bridge. The city is currently expanding its public transit system to accommodate its two million passengers per month.

Recognized as one of the most environmentally friendly cities in the world, Copenhagen goes above and beyond in the area of energy conservation and its unprecedented commitment to achieving high environmental standards has earned the city the title of “European Green Capital 2014” due to its ambitious goals and was also the world’s leading green city in the 2012 Global Green Economy Index.

Copenhagen was also voted one of the happiest countries in the world and it’s easy to see why! With its universal healthcare system, free education, and incredible level of social safety, Copenhagen continues to be a place its residents are proud to call home.

Nordic Saga Tours offer many trips to Copenhagen which can be found on our website. Give one of our experienced travel agents a call; we can't wait to work with you!